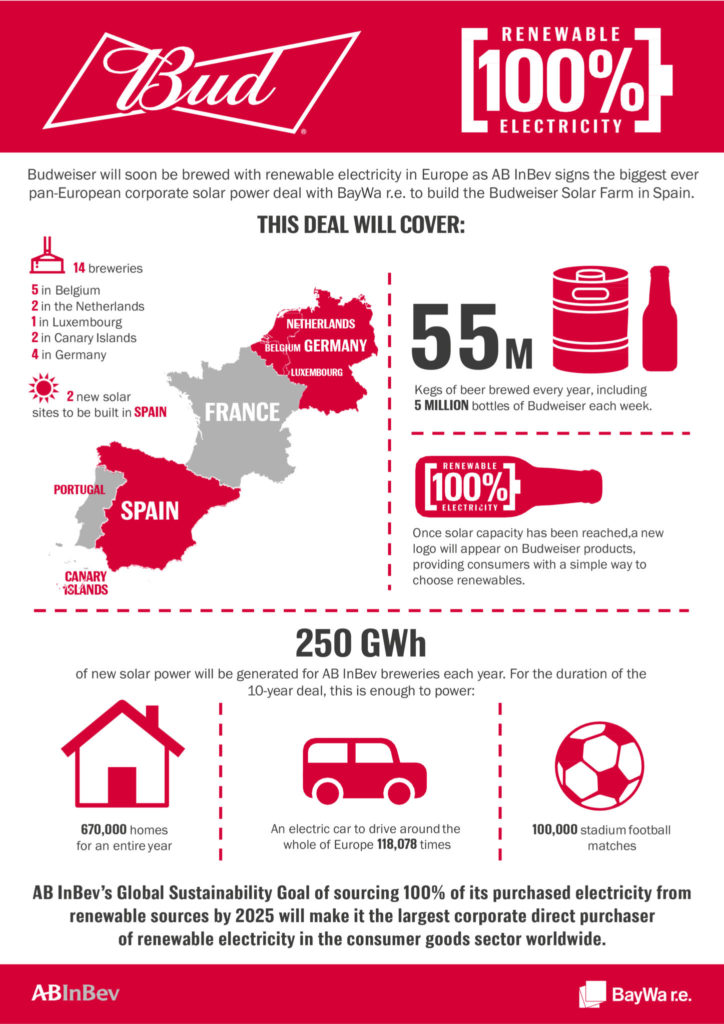 The 10-year Virtual Power Purchase Agreement (VPPA) will see power supplied from two solar farms with a combined power output of almost 200 megawatts of which AB InBev will be supplied with over 130 megawatts.

This makes it the largest Pan-European corporate solar power deal in history, covering AB InBev’s 14 breweries in Western Europe and over 50 brands brewed and sold across 12 countries*, including global brand Budweiser.

BayWa r.e. will fund and develop two new solar sites in Spain, one of which will be called the Budweiser Solar Farm, which will provide 250 gigawatt hours of renewable electricity per year for AB InBev’s breweries. Over the duration of the PPA, this is enough to power the equivalent of almost 670,000 European homes, or 100,000 stadium football matches.

AB InBev’s European brewing operations produce over 55 million kegs of beer each year and around five million bottles of Budweiser each week. Budweiser is now AB InBev’s biggest brand in Europe, following its launch in France and the Netherlands last year.

The new solar capacity is expected to be added and connected by BayWa r.e. by March 1st 2022. Before these solar sites are up and running, BayWa r.e. will provide AB InBev with 75 gigawatt hours of Guarantees of Origin from its wind farm “La Muela” in Zaragoza, Spain – the equivalent power to produce enough beer for 18 Oktoberfests.

Once all Budweiser in Western Europe is brewed renewably, the brand will feature a new symbol on pack to encourage consumers to choose a beer brewed with 100% renewable electricity.

The symbol, which is rolling out across Budweiser in the UK and the US, following solar and wind power deals in those markets, is available for other businesses to use, in a move that the brewer hopes will help to shift consumer choice.

Jason Warner, Zone President for Europe at AB InBev, said: “As a brewer, we rely on natural ingredients – water, hops, barley and yeast – to make our beers, so we know that sustainability is not just part of our business, it is our business. From recycling CO2 released in the brewing process to eliminating plastic from our packaging, we are constantly looking to not only reduce our environmental impact but to have a net positive effect.

“This is why we are hugely excited today to announce this partnership with BayWa r.e. to build the Budweiser Solar Farm, add new European solar capacity and brew our beers across Western Europe with renewable electricity. As we welcome the new European Green Deal, we now ask our consumers, customers, colleagues, business partners and fellow companies to join us in shifting towards renewable power – we are making our 100% renewable electricity symbol available for any brands that are produced with renewables. This symbol is about driving positive change in what people buy in their weekly shop, order at the bar or drink with friends.”

Matthias Taft, CEO at BayWa r.e., said: “Consumers increasingly want to make ‘green’ choices with the products they buy. Leading brands, like Budweiser, are showing the way and we are proud to be supporting AB InBev in their own renewable energy transition.  Corporations are the new driving force in this transition and, within the retail sector, it means consumers can help play a part in combatting climate change through the buying decisions they make. In addition, AB InBev is able to source affordable, reliable and sustainable energy.”

As part of its 2025 Sustainability Goals, AB InBev has committed that all of its purchased electricity will come from renewable sources.  The company is making progress in shifting to renewable electricity in its operations around the world, including in the UK, Russia, Mexico, the United States, Australia, China and India. This global commitment will make AB InBev the largest corporate buyer of renewable electricity in the consumer goods industry.