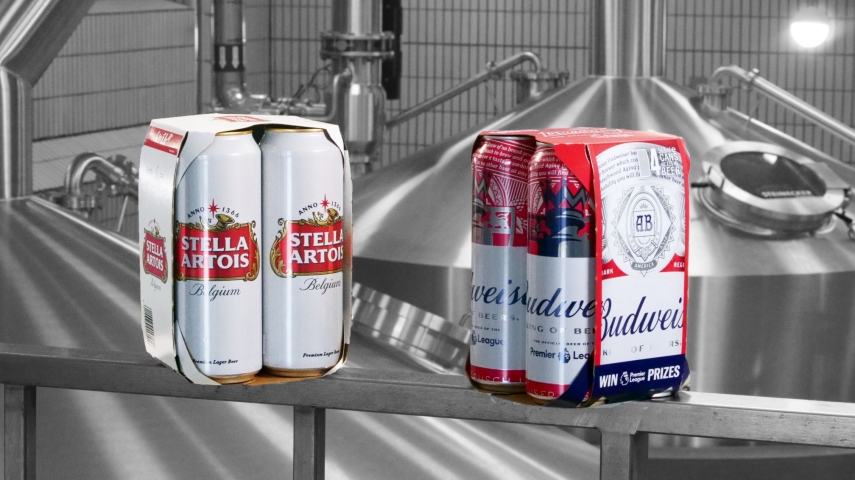 PRESS RELEASE: London, UK, 19 October 2020: Budweiser Brewing Group UK&I, a proud part of AB InBev, today announces that its iconic portfolio of beers is now plastic-ring free – eliminating 250 tonnes of plastic every year across its full canned beer range, including Budweiser, Bud Light and Stella Artois. In total, combined with decreasing its usage of plastic shrink wrap, the brewer has removed 850 tonnes of plastic waste, the equivalent weight of 67 double-decker buses, from its supply chains.

Budweiser Brewing Group first announced this ambition in September 2019. It invested £6.3 million into the packaging infrastructure at its breweries in South Wales and Lancashire, and in just 13 months, has reached today’s milestone. The sites, which together produce more than 4,000 cans per minute, upgraded three canning lines. Now, the sites are fully equipped to produce alternatives to plastic rings, including fully recyclable wraps and Keel Clip™, a new technology which uses recyclable paperboard to create a lighter weight pack.

When plastic rings were first introduced in 1960, they were seen as revolutionary. However, consumer perception of them has changed drastically over the past 60 years, and there are now more suitable alternatives available. New research out today [1] has revealed that, when considering plastic rings, over half of Brits (56 percent) immediately think of wildlife trapped in them and a similar amount (53 percent) of ocean pollution. When asked more broadly about single-use plastics, 82 percent of respondents believed the reduction of the UK’s consumption of them to be important and 27 percent even said they feel guilty when they buy products with single-use plastic.

Driving circular packaging is a key aspect of the brewer’s ambitious 2025 Sustainability Goals. AB InBev aims to have 100% of its products in packaging that is returnable or made from majority recycled content by 2025.

Paula Lindenberg, President of Budweiser Brewing Group UK&I, said: “Sustainability and the well-being of our planet is one of the most important priorities for our business. We couldn’t have predicted the events of this year, but we were determined to not let this hinder our sustainability progress. It’s why I’m so proud that we’ve met our target of removing plastic rings and shrink wrap from all our canned beers. Thanks to the hard work of our teams, there will be no plastic rings on any canned beer that leaves our breweries in the UK from today.”

Steve Gould, Innovation and Marketing Director, Graphic Packaging International said: “We share the same vision as Budweiser Brewing Group when it comes to sustainable packaging. That’s why it’s been great to work together to roll out KeelClip across its iconic portfolio of canned beers. KeelClip is made from renewable sources, is easy to use and, crucially, to recycle. We’re proud to be playing a part in helping the beer industry contribute to the future of the planet.”

Giles Bolton, Responsible Sourcing Director at Tesco said: “We are working with branded suppliers to remove and reduce as much packaging as we can, reuse more, and to make sure everything that’s left is recycled. It’s fantastic to see Budweiser Brewing Group make such a comprehensive move and removing this much hard-to-recycle plastic from across its range. It is vital that more brands make similar progress with the products we stock in our stores.”

Despite increasing desire to purchase plastic-free products, the COVID-19 pandemic has had a negative impact on the fight against plastic, with a third of Brits (33 percent) believing the war on plastics has slipped down the media agenda. The research also revealed that half of consumers (49 percent) believe it should be easier to make plastic-free choices and a further 46 percent believe brands should be doing more to help them reduce their plastic consumption. As well as today’s announcement, Budweiser Brewing Group has also recently revealed further initiatives to help people make more sustainable choices in their daily lives, including:

The announcement comes as C&C Group, a key distribution partner for Budweiser Brewing Group, has also commenced its plans to cut plastic rings and shrink wrap across its cider portfolio, including Magner’s and Orchard Pig, removing more than 250 tonnes of plastic from the UK market. The changes began to roll out from March 2020, and will be completed by December 2021, by which time all of C&C’s cider brands will be packaged in 100% recyclable paperboard supplied by Graphic Packaging International.