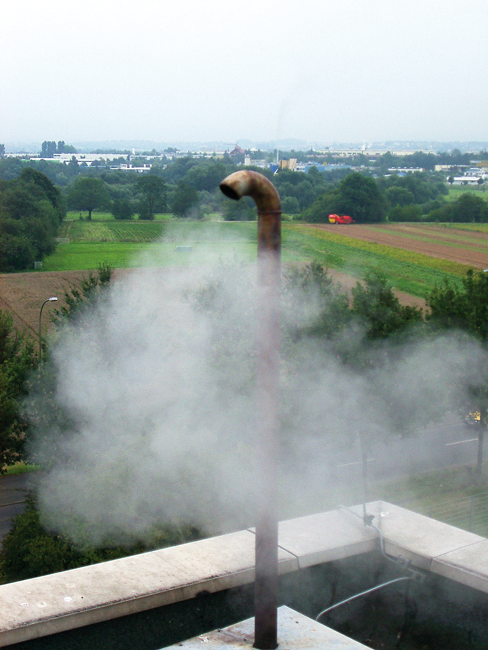 It is common practice to de-gas boiler feedwater by boiling-off harmful gases, especially dissolved oxygen. However, this process results in a continuous loss of steam – usually about 0.2 – 0.5% of the boiler’s steam output. With OxySteam, these losses are reduced by up to 95%.

The innovation is implemented in Germany in cooperation by the Warsteiner Group and Bitburger Group.

In technical terms, feedwater for steam generation boilers must meet certain minimum quality criteria. For shell boilers, the feedwater requirements are based on EN 12953 Part 10 (formerly TRD 611). Gases dissolved in recycled condensate and in fresh make-up water can cause damaging corrosion inside boilers and pipes.

To fix this, dissolved gases can be removed by various means. The most common is called Thermal Degassing. Physics (Henry’s Law) dictates that the solubility of gases in a liquid reduces as the temperature of the liquid increases. As a result, liquids when boiled contain almost zero dissolved gases.

This process can been seen when simply heating water. When cold, fresh water is heated in a pan, small gas bubbles form on the bottom. As the temperature rises, the bubbles increase in size, detach from the bottom and rise to the surface of the water – those bubbles contain gases which were formerly dissolved in the cold water.

Inside the degassing tank, water is heated by steam injection to above boiling temperature. This releases dissolved gases. They rise into the head of the degasser dome and flow in countercurrent to the incoming water, to escape from the degasser into the atmosphere via the steam exhaust valve.

When a fixed position exhaust valve is used, it is set during commissioning. So that even under ‘worst case’ conditions all gases dissolved in the feed water will be discharged. Published advice recommends setting the exhaust flow at up to 0.5 % of the maximum steam boiler output. It essentially depends on variables such as steam waste, condensate loss and make-up water temperature (deionized).

In practice, the exhaust volume flow is very often set empirically and the real losses are usually unknown. It is only possible to determine the actual losses by means of elaborate measurement techniques. They involve condensing the exhaust vapours and measuring the amount of condensate. Figures from a number of boiler houses suggest losses of 0.15 % to > 3 % of nominal boiler output are common. The steam demand of a typical deaerator can be considerable in relation to the amount of useful steam produced. In situations where the steam demand is low or inconsistent with the degasser running continuously, the absolute losses can be enormous.

To reduce the steam loss, vapour condensers are sometimes used. Normally with the make-up water used as the cooling medium. However this only works while there is a requirement for additional cold make-up water. Since this only occurs intermittently, the vapour cannot be condensed or used a lot of the time.

OxySteam has been developed by Centec as a system for regulating the steam used for degassing, which can reduce steam losses by up to 95 %. The process monitors the gas content of the exhaust vapour. The exhaust valve is then controlled to only discharge steam when necessary for the degassing process.

Continuously monitoring oxygen levels in the vapour allows the exhaust valve and discharges to atmosphere to be controlled. The exhaust valve opens when the oxygen is above an upper setpoint and closes when the lower setpoint is achieved. This can be combined with opening the exhaust valve when make-up water is fed into the system, because freshwater is the primary contributor of dissolved gases.

The controlled exhaust valve is a ‘normally open’ type which is positioned downstream from the existing valve. In the event of a malfunction the exhaust valve will open. The system will then automatically return to its original operation.

It’s possible to evaluate and compare losses before and after this system is fitted – which will differ depending on each set up. However, in many cases the achievable savings are more than 90 %. This is highly significant when considering the ongoing economic benefits of the Centec OxySteam.

Vapour losses represent a waste of heat and energy which can largely be avoided. In many countries energy efficiency initiatives and the reduction of CO2 emissions attract financial subsidies. In Germany, for example, through the “KfW Energy Efficiency Programme – Waste Heat” (KfW Bank = Kreditanstalt für Wiederaufbau) subsidies of 30 % or even 40 % can be granted for a well-prepared application. Needless to say, the financial benefits can be significant for any business with a steam boiler and thermal degasser.

As an example of the potential savings available when using this system:

Depending on the size of the system and the equipment required, the costs for the OxySteam system are about 10.000 EUR. So, including a possible subsidy, this usually results in a short payback period (0.5 – 1.5 years).

Almost all larger industrial companies now have an energy management system. What all these systems have in common is a voluntary commitment to continuous improvement. This means audits must be held at regular intervals and measures to improve energy efficiency must be implemented. The OxySteam system is well-suited for meeting the requirements and can usually be implemented easily and economically.

During the thermal degassing of boiler feed water, vapour losses occur that are discharged to the environment. With this method, the vapour losses can be adapted to actual demand and so reduced by up to 95%. Due to the avoidance of waste heat, the investment may even be subsidized. As a rule, this results in good economic efficiency. In addition, it is a sustainable energy efficiency measure that can be implemented within the framework of existing energy management systems.