The Brau Union Österreich has made environmental and social challenges its priority and is stepping up its investments in sustainable production. In addition to the Göss Brewery, another Styrian brewery is now producing sustainably.

The Schladminger Brewery, a pioneer in the production of organic beer since 1998, has switched to a new energy concept. In December 2018, the brewery was connected to the local district heating network, which supplies one-fifth of the energy required for production. A pellet heating system was also installed in order to supply the particularly energy-intensive steps in the brewing process (such as wort boiling) from sustainable sources. Since mid-2019, Schladming beer has been brewed entirely using green energy.

This new achievement brings to twelve the number of biomass projects currently being carried out by HEINEKEN. Together, they supply more than 6% of HEINEKEN’s global energy demand for production. These projects are part of the company-wide programme “Drop the C”, which aims to reduce the brewer’s carbon footprint. Drop the C is now embedded throughout the company, which has been working to improve the energy efficiency of its breweries since 2008. 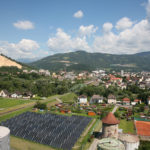